What a turn out for the books, eh? The suns come out and its beautifully warm, currently 23 degrees according to the school weather station where I work. (Click to vi 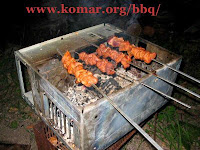 ew)
So...I suppose its that time of year when man, meets his ancestral passion of offering a burnt sacrifice to "the great sun god in the sky"... yes, it's "barbie time!!"
No...not the bloody doll....
...a BBQ this weekend in the garden, burnt offerings of sausages and burgers served on a charcoal stained bread roll or bun smothered in tomato sauce (to hide the taste) and washed down with a cold lager! I spotted this piccy on the web today which as I work in ICT gives me a use for my old pc's! My thanks to komar.org for the use of the pix and the idea!! I suppose if I wanted a picnic type disposable BBQ I could use an old laptop? Nah, don't be saft man...its plastic, it would melt and I guess, probably have more nutritious content than the burgers...

"I truly believe it is harder for people to understand depression than it is for them to understand the offside rule!" Panda 4/2/09

Where I live, some "over testosteroned" pratt decided with his mates it would be fun to beat up a copper...in fact he was a community support officer. They/he, allegedly knocked him down and stamped on his head. The result was the PCSO has a broken nose. Good news is the attacker was caught, hopefully his "mates" too and will no doubt get a slap on the wrist for his misdemeanor! Doubt if he will go to prison or be "keel Hauled" or "Hung drawn and quartered" as most of society and right minded individuals would like!

So what else? Well we have all been possibly "ripped off" by our elected peers...the bloody politicians. Why do we allow ourselves to vote these people in? We watch year after year as they all knock each other down with tales and general tittle tattle whilst really, they are lining their proverbial pockets with pay rises and expenses, trips abroad "on business", on holiday more like, having the times of their lives whilst we cough up our "hard earned" to pay for it...

Who now trusts a bank?
The pillars of our society are all crumbling down around our ears, our pensions are suffering, our savings are suffering, we are suffering. Are they suffering? You bet they are...well they reckon they are but I dont really believe it as I dont expect there are many bank managers in the doll queue! Did you see how the rich are losing there billions/millions? I bet they can still afford a decent meal, the odd pint in the pub and pay there mortgages though, cant they? So should we feel sorry for them? Of course we should....NOT!
They dont give a Sh1t about you, so why should you about them?
I know I keep bringing in links to the Telegraph newspaper but its purely accidental, perhaps they are the most outspoken?

Whilst we are talking about mortgages, (keep up pleee..ase)in the same breath as banks we can include insurance companies.
Anyone bought an endowment mortgage? I did..."barstewards!!" They promise, in writing, on a legal document, (the proposal) to pay a certain figure upon the maturity of my policy. They did not have the now "oft touted maxim" "Stocks and shares may go up as well as down" in those days like they have to now. So why has the bloody thing got a surrender value of only about two thirds of its intended value after 25 years? In all that time I expect they took there due earnings out of its returns and thought..."bugger him!"
And dont tell me to go and claim a mispent endowment either, they wrapped that up nicely by saying only endowments after a certain date are under that jurisdiction. Mine, sadly, falls way to early for that and so they just cast an almighty "two fingered salute" in my general direction whilst they board the plane to Malaga or some other exotic far off destination, paid for by my missing third!

Here's a good ruse...sell off our car industry to someone daft enough to buy it and pocket the cash for yet another politicians holiday some where nice. Oh hang on...the new owners want us to give them millions to keep it open...OK good idea lets give them lots of cash to keep it open!It will stop us having huge dole queues.

Couldn't we have done that ourselves and kept the manufacturing rights in this country? Well...yes we could, but then it would be our problem not the new owners problem! DUH!! Ple....ase...!!??!

Oh well I have probably lost my other reader now, so, I will sign off for another long spell as the country experiences its summer and the government probably gives us a hosepipe ban, just incase, the leaks in the water works arent yet repaired and we run out of water...try telling that to those on the banks of the severn!

P.s. some good news: We just won the cricket! Wahey...it's not all doom and gloom then!
Posted by Moriarty the Mundane at 5:57 PM No comments: