History...
If you go back to my posts to that beautiful summer of '06 you will see I  had a new Indian Sandstone patio laid and we were really chuffed!
The patio was as we expected and wanted but, is it, still eight years later?

In essence the design was flawed, money at the time was tight (isn't it always) and looking back we so chose the wrong material and should possibly have laid it upside down to how we did!

That sounds like we did everything wrong so let me elucidate!

The general design with the circle of stones in
front of the patio doors looks great, but late at night its the wrong side of the garden to get the evening sun. Shade from either our tree or a neighbours tree blocks that warm evening sun on that side of the garden, so installing it the other way round would have been so much more practical but would sadly look wrong for the building.

Why have we decided it is all wrong?
The Indian Sandstone comes in slightly irregular shapes and sizes, nominally all the same but, just slightly out in length and width but, thickness in particular. Hand cut, this is to be expected. Also, one side is smooth the other side is a nice riven finish. Riven looks nice, but holds the water after rain and in the winter this freezes and the stone is slightly prone to pieces breaking away. The smooth side would not have done this so much I expect and as a bonus, it would be nicer to walk on. Yes, riven can be a trip hazard especially for the old, infirm or, dare I say it, the slightly inebriated on a warm summers evening!

Maintenance...
Over the years the only real work done has been twice annual cleaning with a pressure washer which makes a huge difference. Firstly in the Spring then again late Summer, also the pointing between the stones has had to be redone once about four years ago and in truth it needs doing again! We are about to patch it up but, if not successful, out will come the angle grinder and new "compo" duly inserted.

However... Indian sandstone, like all other sandstones and limestone, suffers with moss and lichen and that is the main problem. The moss cleans off ok with the pressure washer but the Lichen! It just grows into black spots and nothing but a wire brush (impractical) will get rid of it and it spreads and spreads. This totally ruins the look of the patio. So much so, I was considering having it ripped up and replaced!

The power of Google and the internet...
I decided a few weeks back to really sort this out once and for all so we "pressure washed" the patio to see how well it had faired over the winter. The result, although impressive at removing surface grime, did not please us one bit. The black spots were every where!
The picture on the right was directly after pressure washing. I took it whilst wet as it stands out so well then!

General consensus of opinion on the internet is to use bleach, nice thick neat bleach and leave it work for some time. Repeating as necessary every few days. The results were poor! After three lots of bleaching and scrubbing very little difference was noticed. Really bad areas, and the picture (right) shows a better area NOT a bad area, showed very little change.

Stronger bleach was needed was my first thoughts... but where from?
More searching on the 'net bought up a suggestion. Sodium Hypochlorite, as used in swimming pools. Readily available from Ebay some was quickly purchased. The result was pretty amazing!
See the before and after pictures below and see what I mean.


The picture (left) is after pressure washing and one treatment with Sodium Hypochlorite. The lower picture is of the same slabs after a second treatment! I for one am suitably impressed!
I am now treating every last stone for the second time. Some areas are superb others I am going to try a third session on them but if they do not improve then I will wait for a nice day, pressure wash a quick sweep of the patio, then once dry I will treat the whole patio with a sealing solution.

So what's the procedure? It's not rocket science. 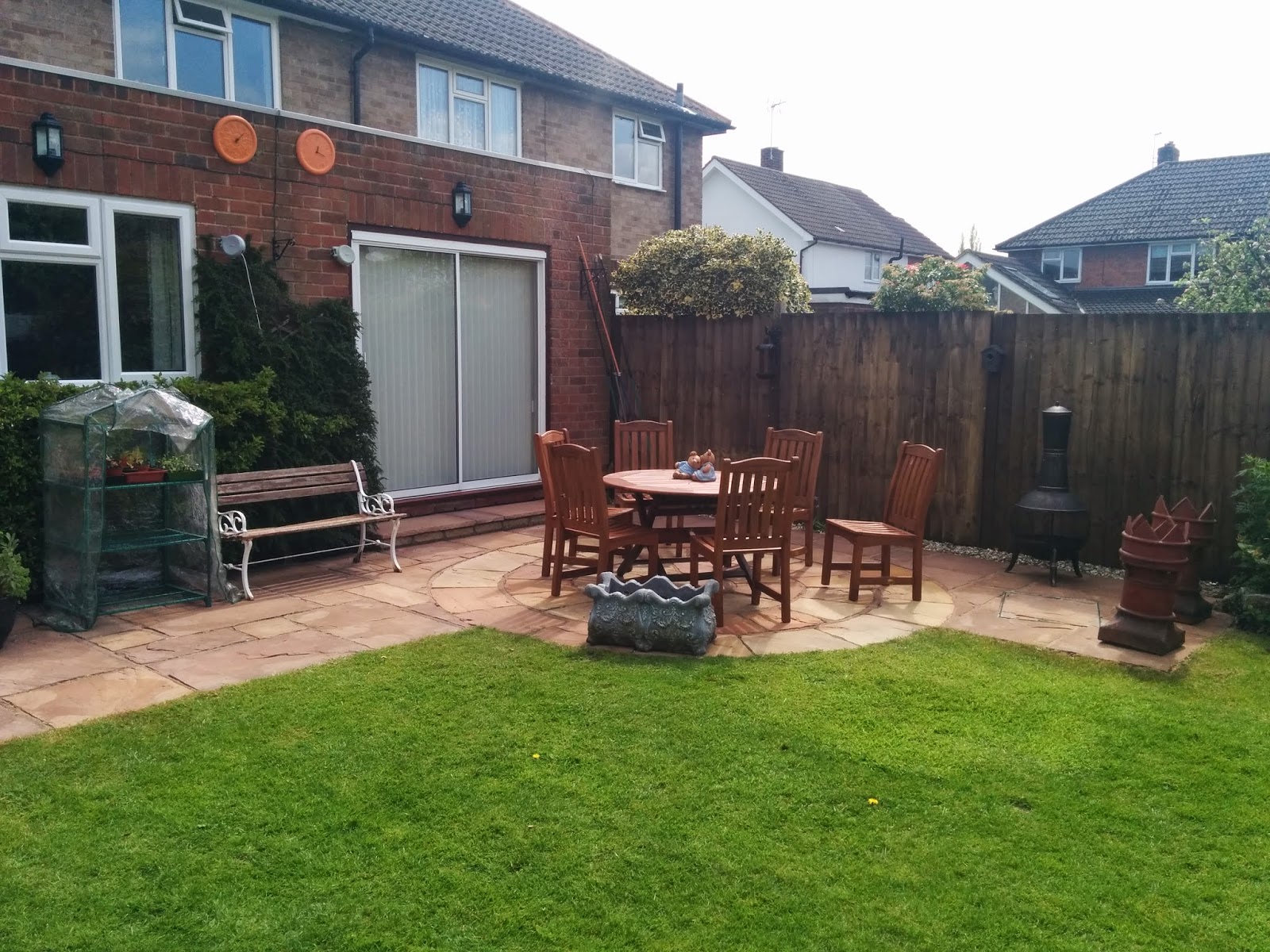