Apart from playing Ukulele, I have, as I know I have said before, struggled with playing a guitar for over 40 years. My main problem is lack of ability, but, as I have got older I think rheumatism is my main problem now. 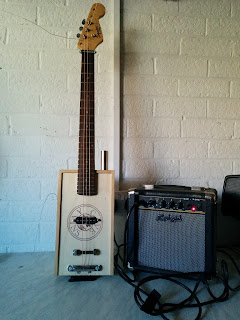 We have a number of guitars in the household as both my sons dabble and own guitars but I have two six string electro acoustics, a Vintage and a Takamine and I have my beautiful old Kimbara 12 string I purchased new in 1974. It has seen better days, has been extensively repaired at one time because the body was bending under the strain of the strings as so often happens with 12 string guitars, but, it really is a beautiful guitar to look at, to hold and to play with. Much like a good woman!

On another note, I recently built myself a CBG! That's a cigar box guitar to those not in the know. You may have seen "Seasick Steve" on TV/Youtube playing one.

Mine was made from an old wine box and every part was "acquired" from somewhere sometime ago. I did not try to build a work of art, I just "threw it together" over odd bits of spare time totalling about five hours. I have to say it's a marvelous stress buster when you wind the amp up to 11 and go for it! There is no other word for the noise that comes out of it, it is a beautiful ROW! Somewhat raucous, somewhere between the noise of steel scraping on concrete and hob nailed boots treading on a cats testicles!
Here is a quick video: