In my last posting I mentioned my vasectomy. 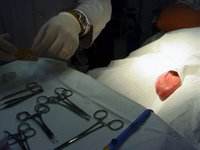 Now those who know me know I like a laugh and a joke and don't mind having the p*ss taken out of me. "Just remember, I can always take it back out of you" I say. And I do!!
So when I wrote my last blog I did say that I may talk about the "old severing of the testicles" in some detail.

Now, being shy and retiring I never got around to having my operation filmed...well you don't do you? But, I have researched the operation on the web and found a cracking site dedicated to the fine art of the vasectomy.

Surprisingly, I am amazed at the men who have said they have had it done when they heard I had but, more surprisingly, the men who were squeamish as I gave them the gory details. If a guy was particularly squeamish I used to slightly exaggerate the really juicy bits, there aren't really any/many, just to watch them turn a nice shade of puice!

The sad thing was when one of the girls in the office mentioned that her "other half" had cancelled his appointment three times! He still hasn't had it done! So this blog is dedicated to him and those like him, to say "come on mate...two bricks and smack its all over! It doesn't hurt a bit, unless you catch your thumbs!"


So for those brave enough, visit...
http://www.beavercleaver.net/

So why was my blog entitled "So hows your plums!"?
Well it was performed on a Tuesday and by Thursday they were going a little darker than usual. By Saturday there was a definate soreness and some swelling. Nothing, as one would say "Untoward" or "Unduly Concerning." The following Tuesday? PLUMS....thats the best I can describe them! The Left one? Well....any bigger and Cricket and "tampering with balls" springs to mind!

Happy days...
Moriarty the mundane....
Posted by Moriarty the Mundane at 8:50 PM No comments:

Today I had a vasectomy!
I suppose that if you read the title above you have guessed already what I am about to say?
I may do a blog on my vasectomy over the next few days so that the men in this world who cant bring themselves to have one, may feel better about it and go on to do it! But, I digress... 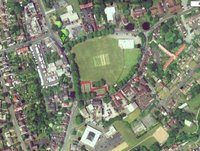 I live in a village....a nice village with a cricket green and a church, a local womens institute a new library, shops, a bank, Doctors surgery, infact everything you could wish for, BUT FOR PARKING SPACES!
So, whats this got to do with speed bumps?

People don't park in Wombourne, our village, as there are too few places to park, so they "Dump" their cars where they like and go about their shopping etc. On pavements, across driveways, even blocking off a roadway to a local old peoples home. Obviously, this causes mayhem with the traffic which over the years has been exacerbated by the inability of our local council to stop builders building on any scrap of land they think they can get away with.

To quantify/qualify this fact, in 1984 when we moved to the village it's population was about 10500. It is now nearer 18000 and still growing. It is infact recognised as the second largest, possibly the largest, village in Britain. It is bigger than many towns and it would not surprise me if there is a city, somewhere, smaller or of similar stature!
To try and overcome this problem we had a number of choices and the council for whatever reason chose traffic calming measures. SPEED HUMPS to you and me!

Dont just take my word for it look what Bob Lee had to say about speed humps in staffordshire...

"The use of speed humps does affect patients. No matter how careful the driver is, it's uncomfortable to go over speed bumps. Crews have to slow down and with something like a heart attack patient, every second is vital. Potentially speed humps may be life takers, not life savers."

Me, I would have towed and ticketed every wrongly/badly parked vehicle in sight until the populace learnt how to drive/park/be courteous!

I am not sure of the logic, even though I attended a meeting or two about the new measures before they were implemented, but I think the hidden agenda here is to make the village so bloody awkward to get into, or out of, people would rather shop elsewhere than traverse each of these monolithical speed humps that abound on the main arterial roads of the village. I hear more are on the way for the last remaining road into the village as the last onslaught has not quite killed off the traffic or the local shop trade!

Still....back to this vasectomy and those bloody humps!

The wife was driving and we were approaching the humps and she slowed down for them, as you would. She wasn't travelling very fast, probably not even twenty miles an hour, when she hit the first hump. God strike! It was like someone was practising their circus skils with my goolies!
Half a dozen humps later and I was looking for the pain killers and wishing i had never heard of a vasectomy never alone just had one!

So, the moral of this story?
If you think you need a vasectomy and you live near me, think carefully, very carefully, about what you intend to do. Then plan your route home!

Catch you later....
Moriarty the mundane aka "One hung low"...
Posted by Moriarty the Mundane at 4:06 PM No comments:

Well I said I did not think it could get more mundane than this and yesterday it did!

A fellow mower enthusiast (Paul) got in touch via this blog and we met up yesterday. Suffice to say we had three hours together and we both found we had a good friendship developing and an unhealthy interest for old mowers and motorbikes! Suffice to say, we swapped old motorcycling yarns and then had a play with each others respective mowers. Paul has a similar mower to my old Atco and an all but identical Qualcast 16 (Puffing Billy) it was a novel experience to say the least.

Now I know I write tongue in cheek...but this is now getting a little surreal to say the least.
Nevertheless....we are contemplating going to the Malvern show in two weeks time to possibly exhibit our mowers in a stand of Vintage mowers!


Moriarty the mundane....and ridiculous!!??!
Posted by Moriarty the Mundane at 5:21 PM No comments: